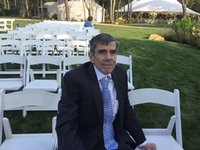 Michael Applegate Horan passed away peacefully March 24, 2019, at Samaritan Hospice, Mt Holly. Age 68. Born in Riverside, NJ, Michael was a longtime resident of Delanco, NJ.   As head of the Child Custody Division of the Court of Common Pleas for the First Judicial District of Pennsylvania--City of Philadelphia, Michael held the notable and ancient judicial title of Special Master and as cited by the Philadelphia Bar Association made an outstanding contribution to his profession and to the welfare of children in the care of Court.

Following his undergraduate degree at the University of Maine at Orono and his J.D. at Temple University Law School, Michael practiced law in Philadelphia before clerking for Judge Leonard A. Ivanoski.   In addition to significant interest in gardening, and his accomplishments as a pianist, studying under Malvina Collins, pupil of the Composer Bela Bartok, Michael was an avid genealogist and historical expert on the prominent first colonists of Southern New Jersey, from whom his Mother’s Applegate family descended.  He was also an active member of the Delanco Historical Society.

Beloved son of the late I. Francis Horan and Shirley Applegate Horan. Loving brother of Patricia Horan (Bruce Miller), Timothy W. A. Horan and Barbara M. Horan. Uncle of Katherine M. A. Hurt (Benjamin B.). Nephew and Godson of Joseph P. Horan; dear cousin of Kathy A. (Bell) Forcellini and numerous other cousins.

Relatives and friends are invited to attend Michael's viewing Friday evening from 6 pm to 8 pm and Saturday morning from 9 am to 10 am at the Chadwick Memorial Home, 154 Webster St., Riverside, NJ.  Burial Office and Holy Eucharist 10:30 am at Christ Episcopal Church, 305 Main St., Riverton, NJ. Interment Overlook Cemetery, Bridgeton, NJ.

Donations can be made in Michael's memory to Samaritan Healthcare & Hospice of New Jersey (https://samaritannj.org/) or to American Ancestors/ New England Historical Genealogical Society (https://www.americanancestors.org/support).