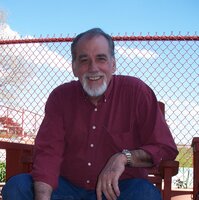 Carl H. Lambeck passed away peacefully on Friday October 28, 2022, at the age of 78. He was surrounded by the love of his wife Sheila Lambeck of 21 years, along with Lisa, Leah, Olivia, John, Vikki, Desmond and Julian who loved their Poppy unconditionally. Born in Philadelphia, PA, a resident of Delran, NJ for the past eight years, and former resident of Narvon, PA. Carl proudly served his country in the U.S. Navy during the Vietnam era and would frequently say with a big smile that he served for “five years, three months, and twenty-one days, but who’s counting.” Recently retired from Lockheed Martin, he was employed as a Senior Database Administrator and was frequently referred to as a brilliant program engineer. His innate ability to analyze issues and solve problems seemed endless and his wife would proudly let you know this. Among family, he was commonly known as the “fixer of everything” because he was the master of repair and tinkering. Carl was a member of the Masons Lodge and the Living God Lutheran Church in Honey Brook, PA which he was an integral part of constructing from the ground up. He served on the HOA Board of Ashley Crossing for many years where he loved to argue his point for the good of the residents. Carl was man of integrity with a heart of gold, large opinions and a very strong will. He was proud of his Christmas train set, would play Jingle Bells on the piano and would invariably send a grandchild to get him another cookie. These are holiday memories that will forever be in our hearts. He made sure everyone knew that he loved cheese, olives, pretzels, and “soda fountain soda”. Carl was very family orientated and spent many enjoyable summers boating and camping with family. Nice boat! Beloved husband of Sheila and devoted father of Lisa Kamaras, John Murphy Jr. (Vikki), Kim Goshert (Travis) and Sheri Hackart (Chris). He loved his grandchildren very much, namely Leah Kamaras, Olivia Kamaras, Desmond Murphy, Julian Murphy, Holly Harting, Heather Hackart and Aaron Hackart. Dear brother of Robert Lambeck (Phyllis), Dorothy Lambeck and the late Bill Lambeck and Gus Lambeck. He was predeceased by his parents Gustave and Anna Lambeck and his former wife Madalon Lambeck. Carl will be deeply missed, fondly remembered, and forever loved. A private ceremony will be held in his honor.