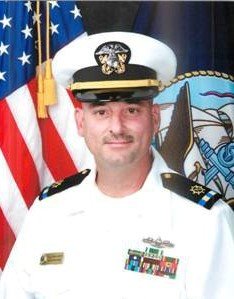 Please share a memory of John to include in a keepsake book for family and friends.
View Tribute Book
JOHN GERALD LEE RAWLS was born in Riverside, NJ on March 3, 1964, to the parents of William Allen Rawls and Joan Marie Keaveney. He was the fourth of five children in the Rawls family, with siblings William Allen Rawls, Jr., Barbara Rawls Gaul, Denise Rawls Lowe, and Michael Allen Rawls. Coming from a Catholic-based family, John attended St. Peter's School in Riverside, NJ throughout his elementary and junior grade years. Then, he went on to attend Burlington County Vocational-Technical High School in Mt. Holly, NJ for most of his high school years. Upon earning his GED, John joined the United States Navy on September 26, 1986 as an Enlisted Deck Seaman, where he spent the next 30 years transitioning up the ranks as an Operations Specialist and into the Warrant Officer program. He ventured on many deployments around the world while serving aboard ships like the USS Bristol County (LST-1198), the USS Belleau Wood (LHA-3), the USS Dubuque (LPD-8), the USS Benfold (DDG-65), and the USS Mason (DDG-87) to name a few. John retired from the Navy on October 1, 2016 as a Chief Warrant Officer (CWO3). Throughout his life, John has been blessed with love and the surrounding of friends and family. John is survived by his son, Noah, from his first marriage and his wife, Miki, and daughters, Megan and Emily, from his second marriage. John was a resident of Temecula, CA during the final years of his life. He passed away at the Portland VA Medical Center in Portland, OR on January 16, 2020 due to liver failure. John was 55 years of age. A memorial service for John will be held on Monday, February 10, 2020, from 9am-11am at Miller-Jones Mortuary located at 26770 Murrieta Road, Sun City, CA 92585. A funeral procession will depart from there to Riverside National Cemetery located at 22495 Van Buren Boulevard, Riverside, CA 92518, where he will be laid to rest. The Veterans of Foreign Wars (VFW) Post 4089 in Temecula, CA will be hosting a Celebration of Life reception for John Rawls later that day. For further information, you can contact the funeral home at (951) 698-6400. The family asks that sympathy cards and donations be sent in lieu of flowers to: The Rawls Family, 32209 Copper Crest Lane, Temecula, CA 92592.
To send flowers to the family or plant a tree in memory of John Rawls, please visit Tribute Store
Monday
10
February

The family asks that sympathy cards and donations be sent in lieu of flowers to: The Rawls Family 32209 Copper Crest Lane Temecula, CA 92592

The Veterans of Foreign Wars (VFW) Post 4089 in Temecula, CA will be hosting a Celebration of Life reception for John Rawls later that day. For further information, you can contact the funeral home at (951) 698-6400
Online Memory & Photo Sharing Event
Online Event
About this Event

Look inside to read what others have shared
Family and friends are coming together online to create a special keepsake. Every memory left on the online obituary will be automatically included in this book.
View Tribute Book
Share Your Memory of
John
Upload Your Memory View All Memories
Be the first to upload a memory!
Share A Memory
Send Flowers
Plant a Tree